Mission ImPULSEible 2016 edition: The United Nations Year of the Pulses 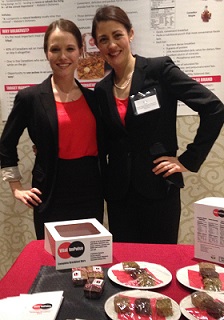 Mount students Lisa Cook and Hailey Madill were declared third place winners of the national Mission ImPULSEible competition on February 23 in Burnaby, BC. Lisa and Hailey’s winning Vital Impulse Bars are breakfast bars made with faba bean flour, chickpea flour and green lentils. The competition was held during the Canadian Institute of Food Science & Technology conference. This marks the third consecutive year that Mount students have placed in the top three teams nationally.

Four teams of nutrition students from two Maritime universities will put their food product development skills to the test at a competition on Friday, January 15, 2016 at Mount Saint Vincent University. The challenge – in its fifth year at the Mount – represents the provincial round and first stage of competition in Mission ImPULSEible, a national event hosted by Pulse Canada and designed to encourage the development of marketable food products using chickpeas, beans, peas and lentils (known as ‘pulses’) as the chief ingredient.

The year 2016 has been declared by the United Nations to be the International Year of Pulses. According to the Food and Agricultural Organization of the United Nations, “The International Year of Pulses aims to heighten public awareness of the nutritional benefits of pulses as part of sustainable food production aimed towards food security and nutrition.” Often described as ‘nutrition powerhouses’, pulses have been nourishing people worldwide for millennia, and today are being transformed into innovative foods ranging from snacks to dinners and desserts. Student teams will present their food innovations starting at 12 p.m. on January 15 in rooms 301-302 in the McCain Centre at the Mount [campus map]. They will be judged on criteria including taste, visual appeal, originality, marketability and health potential of their products. The winning team will have the opportunity to compete against other provincial winners at a national competition in Vancouver this February. Students, staff, and members of the public are invited to attend this event and take part in tastings. Judging will follow immediately after the presentations. The Mount’s Applied Human Nutrition program is one of the Canada’s most highly-regarded university nutrition programs. Mount Applied Human Nutrition grads work across the country and internationally as dietitians, nutritionists, food scientists, and in a variety of other careers. Note: Two Mount Mission ImPULSEible competitors appeared on CTV’s Morning Live on January 14. Watch their interview here.