“When I’m learning, I feel like I’m drinking life. It completely fills me up.” 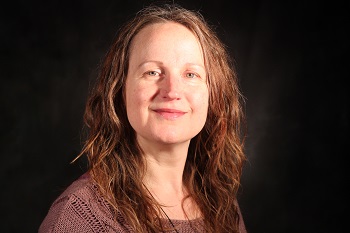 Leah, a mother of two boys, returned to school after careers as a hairdresser, bicycle shop co-owner, and manager at Bell Aliant. “I had to move toward teaching,” she says of her decision to enroll in the Mount’s Child and Youth Study program in 2011. “This is where I belong.”
Dr. Peggy Watts, Director of Distance Learning and Education at the Mount, sits on the selection committee that reviews and forwards applications to the Atlantic Provinces Association for Continuing University Education (APACUE), which administers the award.
“When I called her in December to tell her she had won she was just so enthusiastic,” said Dr. Watts, who remembers being impressed by her commitment to education. Leah remembered things a bit differently, admitting that she burst out crying when she got the call.
“They were happy tears,” she says. Not only does the $1,000 award money help pay her bills, it’s a vote of confidence in her abilities. Leah is particularly interested in helping nurture emotional and social intelligence in children, a life’s work that has been reaffirmed by her practicum experience.
“I treat children with the respect I’d give an adult. That’s my magic,” she says. Leah plans to continue her education with a teaching degree and graduate studies. “It’s such a gift when you figure out what you’re meant to do.”
While all member universities in APACUE can nominate two candidates annually, the Mount holds a strong record with four award recipients in the past five years.
“It’s testimony that we’re welcoming to that population,” said Dr. Watts, noting that mature students are often under different financial pressures. “They have to make sacrifices. That’s clear in the application letters they write.”
Now in her final undergrad year, Leah is on campus often and is co-president of the Child and Youth Study Society. In the past she’s volunteered for Junior Achievers and Scouts Canada, and she’s still a lunch monitor at her son’s school one day a week. To anyone considering their own educational goals, Leah hopes her own experience can be encouraging.
“It’s never too late to recreate yourself and your life.”
Next article »
First World War Symposium to commemorate dark period of global history
« Previous article
International Women’s Day 2014

APACUE established the award in her name in 2009, and bestowed it this year on a UPEI student, and Mount student Leah Cowell.

“I think she would have been extremely keen and supportive of Leah,” says Dr. Peggy Watts, the Mount’s Director of Distance Learning and Education. “She was active in bringing people back to university, helping them along, and advocating for them.”

Dr. Kennedy held an honorary position with APACUE and attended the ceremonies to hand out the awards named for her. She died in 2012. A representative from APACUE will present Leah with a plaque at a ceremony this spring.