One hundred years ago – on December 6, 1917 – an explosion of devastating proportions decimated much of the city of Halifax following the collision of the SS Mont-Blanc and SS Imo in Halifax Harbour.

The SS Mont-Blanc was a munitions ship laden with explosives bound for World War I battlefields overseas. Due to a series of miscalculations by the ships’ pilots, the bow of the SS Mont-Blanc was clipped by the SS Imo. The collision ignited a fire on the SS Mont-Blanc and just after 9 a.m., the ship exploded.
It was an explosion of such magnitude that it was felt in Rockingham where Mount Saint Vincent stood along the Bedford Highway. In fact, the explosion was felt as far away as Truro, Nova Scotia – 100 kilometers from Halifax. The explosion occurred near the Narrows connecting the Halifax Harbour to the Bedford Basin.
At the time, the Mount was one large building housing the Sisters of Charity Halifax Motherhouse for professed Sisters, novices, and postulants; the Normal School for training Sisters as teachers; and the Academy, which was home to boarding and day students in grades one to twelve. The location is home to Mount Saint Vincent University today.
The toll of the explosion was staggering: 2,000 dead, 9,000 injured and 6,000 rendered homeless. Halifax’s North End was destroyed.

“A storm of cracking wood, of smashing glass”

Though there was no loss of life at the Mount, the building sustained significant damage and students and Sisters were cut by shattered glass. Most, if not all, windows were blown out at the Academy resulting in certain sections of the building having to be cordoned off. “There was a crash; a storm of cracking wood, of smashing glass, of falling statuary, of splintered doors; a rain of plaster.” (Student description from Jubilante Deo, Mount Academy yearbook, 1924) 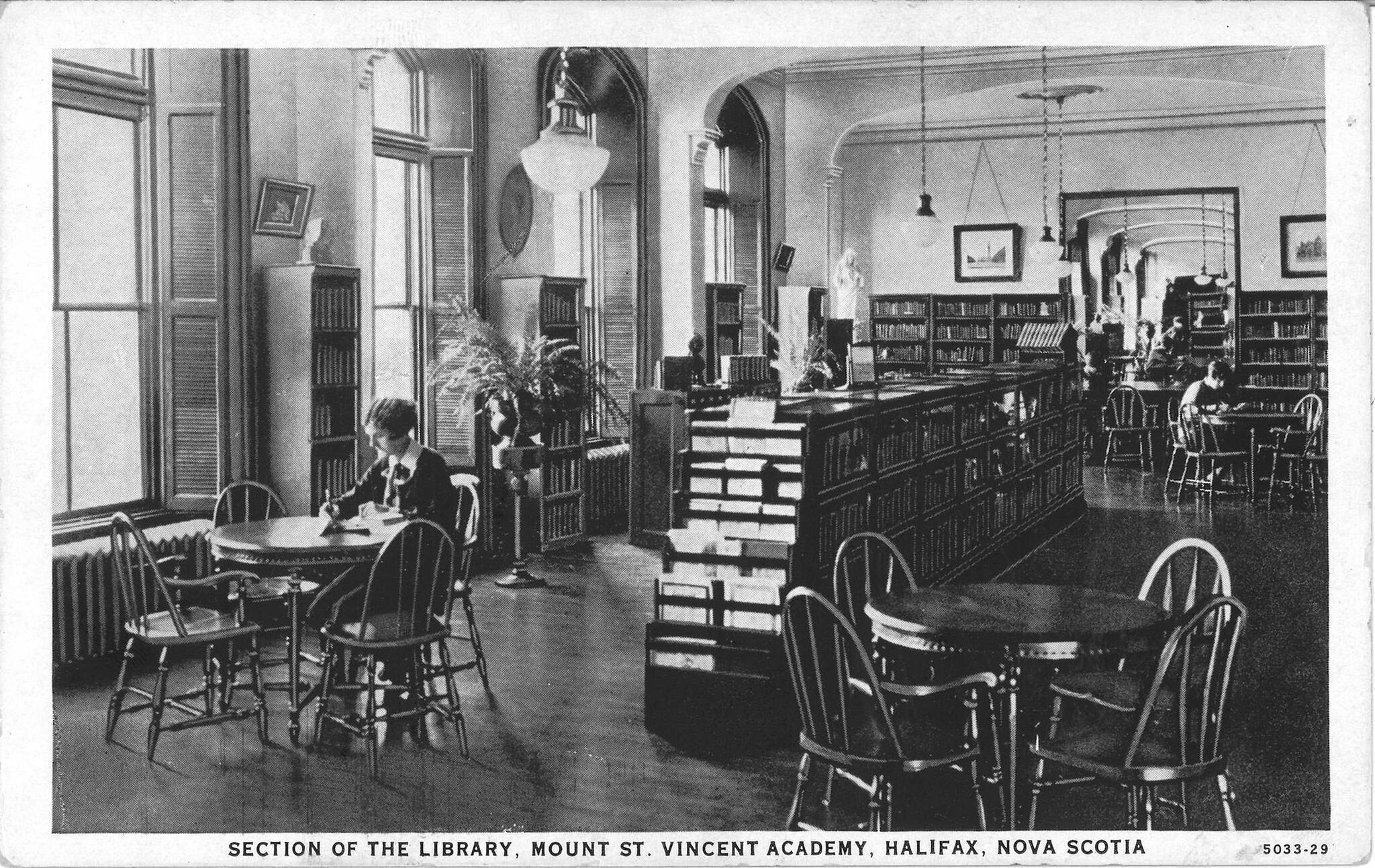 “First, those at the Academy heard a rumble, then felt the building start to shake. The Sisters of Charity supervising the morning classes ordered their students to crouch down and cover their heads with their arms. [It was thought that Halifax might be under attack.] As a result, many had cut hands and arms, but their eyes were alright. There were no serious injuries. In fact, many of the students on the second floor received more cuts and bruises when they jumped through the broken windows – they thought the building might collapse – than from the original impact.” (From a January 1997 memo from T. Joseph Scanlon, Emergency Communications Research Unit, Carleton University) 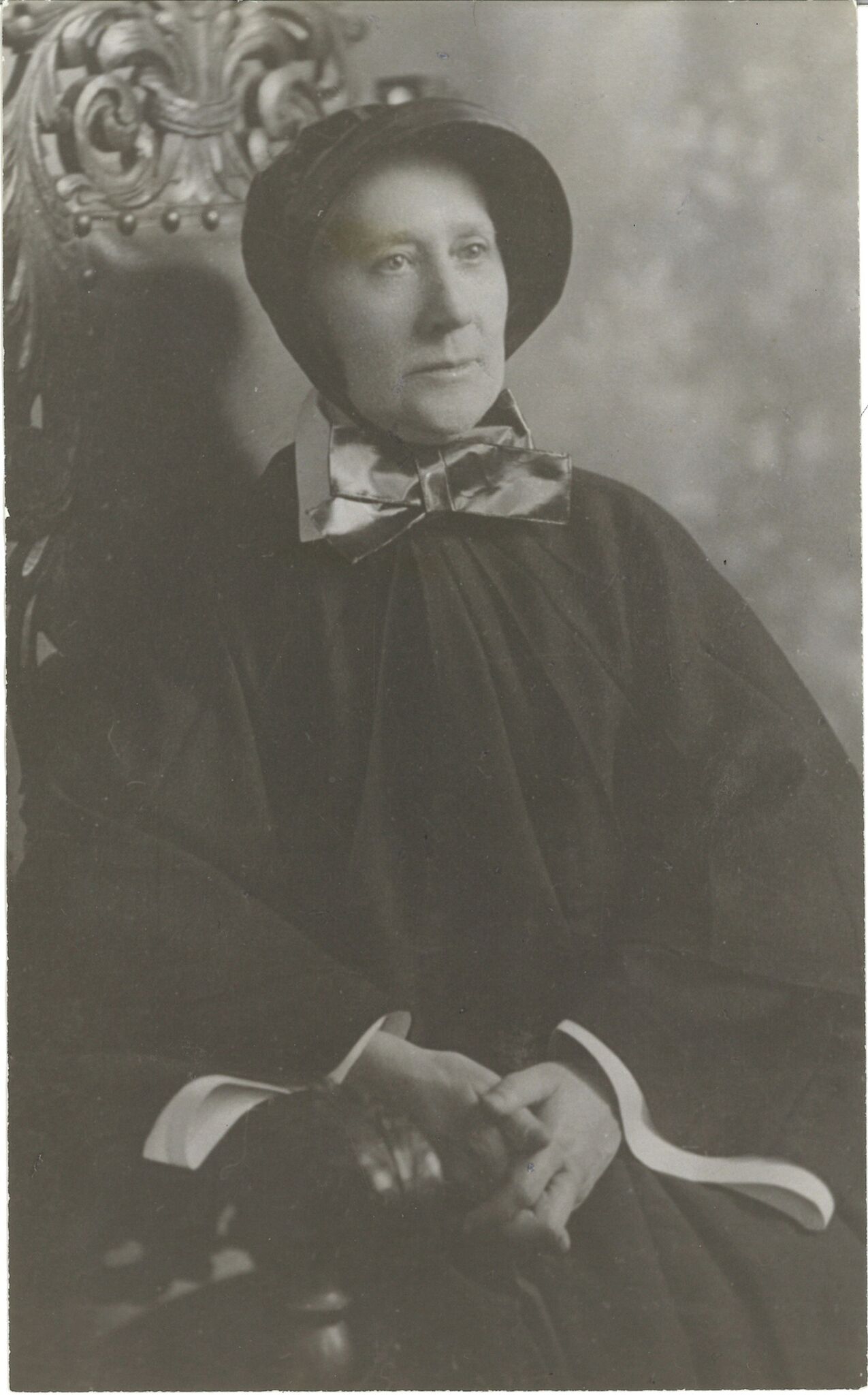 In a letter to the Sisters of the congregation dated December 28, 1917, Mother Mary Berchmans, Mother General of the Congregation of the Sisters of Charity—Halifax at the time (pictured at left), noted: “Every window was broken, some of them old and of stained glass of great value. Pictures and statues were destroyed – the old treasures that mean history to a community. Loyal, loving gifts! All are gone – the priceless mementoes of the friends who struggled with or for us in day of long ago.”
Still unaware of the extent of what had happened in the city’s north end, the Sisters and the students gathered on the lower level of the Academy where they set to work bandaging cuts and scratches.
“We were startled by the arrival of an engineer who came running from his locomotive to beg the Sisters in God’s name for clothing and bandages for the wounded in the city, where thousands were in need of assistance. Sweaters and coats were immediately given, sheets were torn into strips for bandages, and all contributions were piled into the caboose, which hastened back to the stricken city.” (Student account from Jubilante Deo, Mount Academy yearbook, 1924)

“Men came to us and begged for clothing and bandages”

The rest of the day unfolded at the Mount much like in the other parts of Halifax that remained standing. The students and Sisters rushed out into the December cold to the top of the steep hill behind the Academy at about 10 a.m. when word came that another explosion was imminent; thankfully, a second explosion never manifested.
One student described the view from the hill: “Below in the distance we could see cars rushing back and forth, and great columns of smoke and tons of flame rising from the direction of the city. The basin lay very quiet before us, an oily substance on the surface of the water and, heavy, grey, smoky clouds lowering over it.” (Jubilante Deo, 1924)
By noon it was deemed safe to return to the Academy where clean-up started, as did efforts to board up the windows that, without glass, were now letting the wintery elements in. And while the students of the Academy headed home for an early Christmas break, the Mount quickly became a shelter for the wounded and newly homeless.
In the hours and days that followed, all usable space at the Mount Academy became space for treatment or refuge. A woman named Catherine White believed to have been a student at the time described the scene: “Men came to us and begged for clothing and bandages. We frantically tore up sheets and got them everything in the place which would be of any use. At this time, loads of dying and injured were being brought to us in wagons and our Sisters began to assist in dressing their wounds.” (Scanlon, 1997)

“All the rooms on the lower floor were filled with survivors”

“Scores of homeless and injured sought shelter at the Mount from the chaos in the city,” wrote Sister Theresa Corcoran in her book Mount Saint Vincent University: A Vision Unfolding, 1873 to 1988. “Soon the several large rooms on the first floor of the extensive Mount Saint Vincent were turned into relief areas for the injured and homeless moving along the Bedford Highway, the one route out of the city. Many remained at the Mount for several weeks.”
“Before long, all the rooms on the lower floor were filled with survivors, many of them fathers and mothers searching for their children, or children looking for their parents. One woman and child had been brought to the Academy in a carriage pulled up the slope by two men. The horse had been killed. Later, the Academy moved all the seriously injured to emergency hospitals.” (Scanlon, 1997) 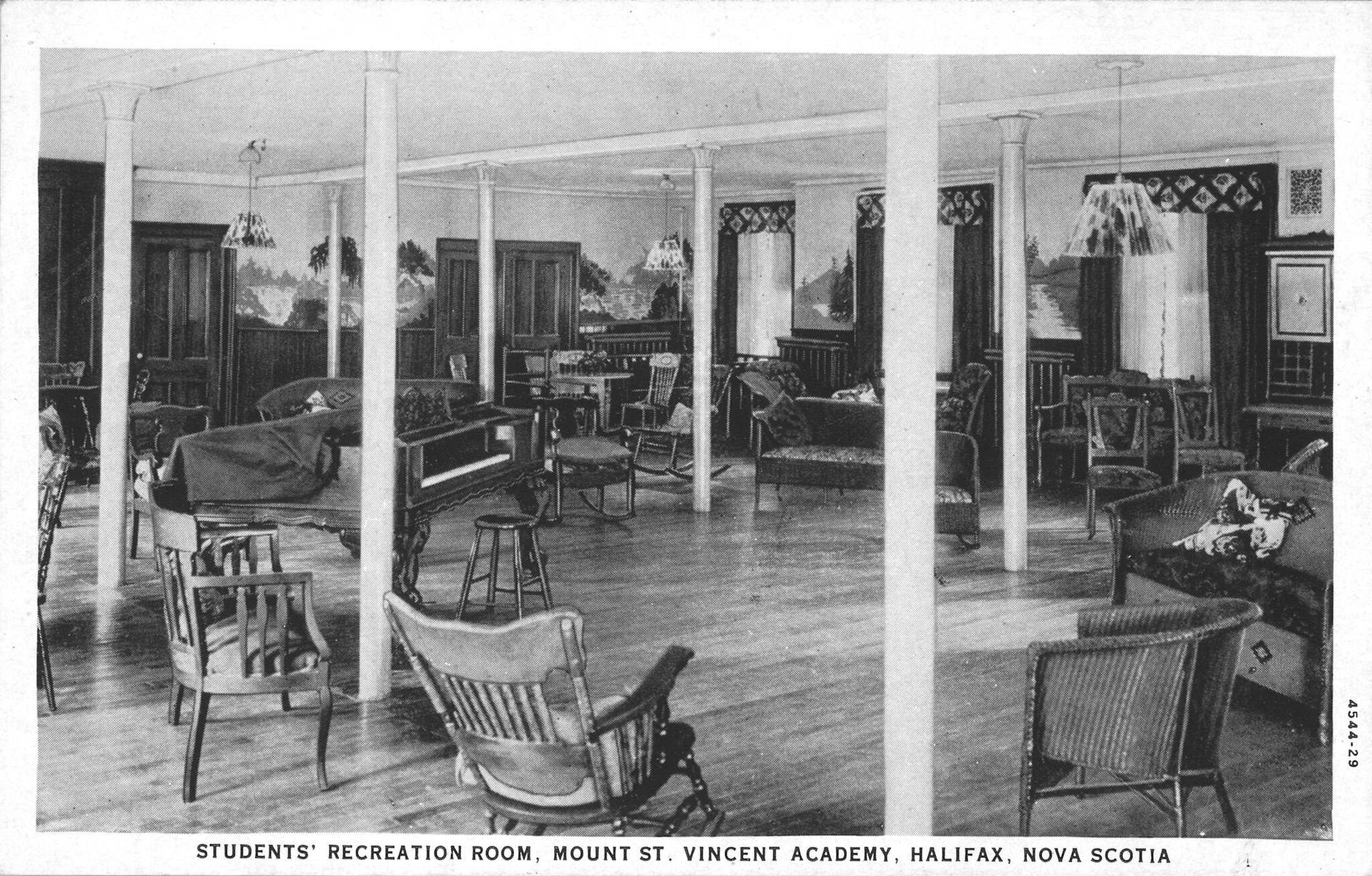 In an account in a Mount Saint Vincent Academy yearbook from 1924, one student described the end of the day: “That evening, the sky looked like glowing coals from the reflection of the fires which were sweeping the North End of the city. A single train left Halifax that night, and on it, the Mount girls departed for their homes. Those whose homes in the city still remained had already gone. So that by eight o’clock our school was dispersed and the Sisters were left alone to save their house from further damage.”
Their work continued in the weeks and months ahead, even after classes resumed on January 15, 1918. The Sisters travelled to other locations daily to help care for the injured, some of whom remained hospitalized for months. In the early aftermath, Sisters sporting tool belts covered broken windows with tarred paper and boards. “When a supply of glass did come, there were no workmen for hire, so the Sisters themselves acted as glaziers,” wrote Sister Maura Power in her book The Sisters of Charity Halifax. Repairs at the Academy were finished by June.
Of note, the many accounts from the time have embedded in them the same values that are at the core of the Mount today – an unfailing commitment to people and the community, and institutional pride. The Sisters and students of that time are part of the foundation on which today’s Mount is built. Their legacy lives on in the University’s current faculty, staff, students and alumnae.
“On the day after the explosion, when Mother Berchmans was discussing possibilities and probabilities with Father O’Reilly, she said with her usual courage, ‘If the inspectors condemn this building, I will begin another Mount tomorrow’.” (The Sisters of Charity Halifax, Sister Maura Power, 1956)
Thank you to Mary Flynn, Congregational Archivist with the Sisters of Charity—Halifax and Lindsey MacCallum, Mount Librarian, for their assistance in preparing this story.
Materials courtesy of the Sisters of Charity – Halifax Congregational Archives and Mount Archives

Read accounts of the Halifax Explosion from the students and Sisters who were at Mount Saint Vincent Academy on that tragic day. 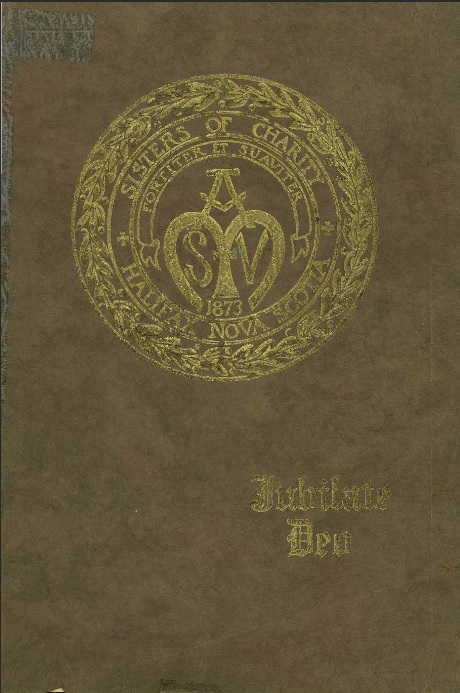 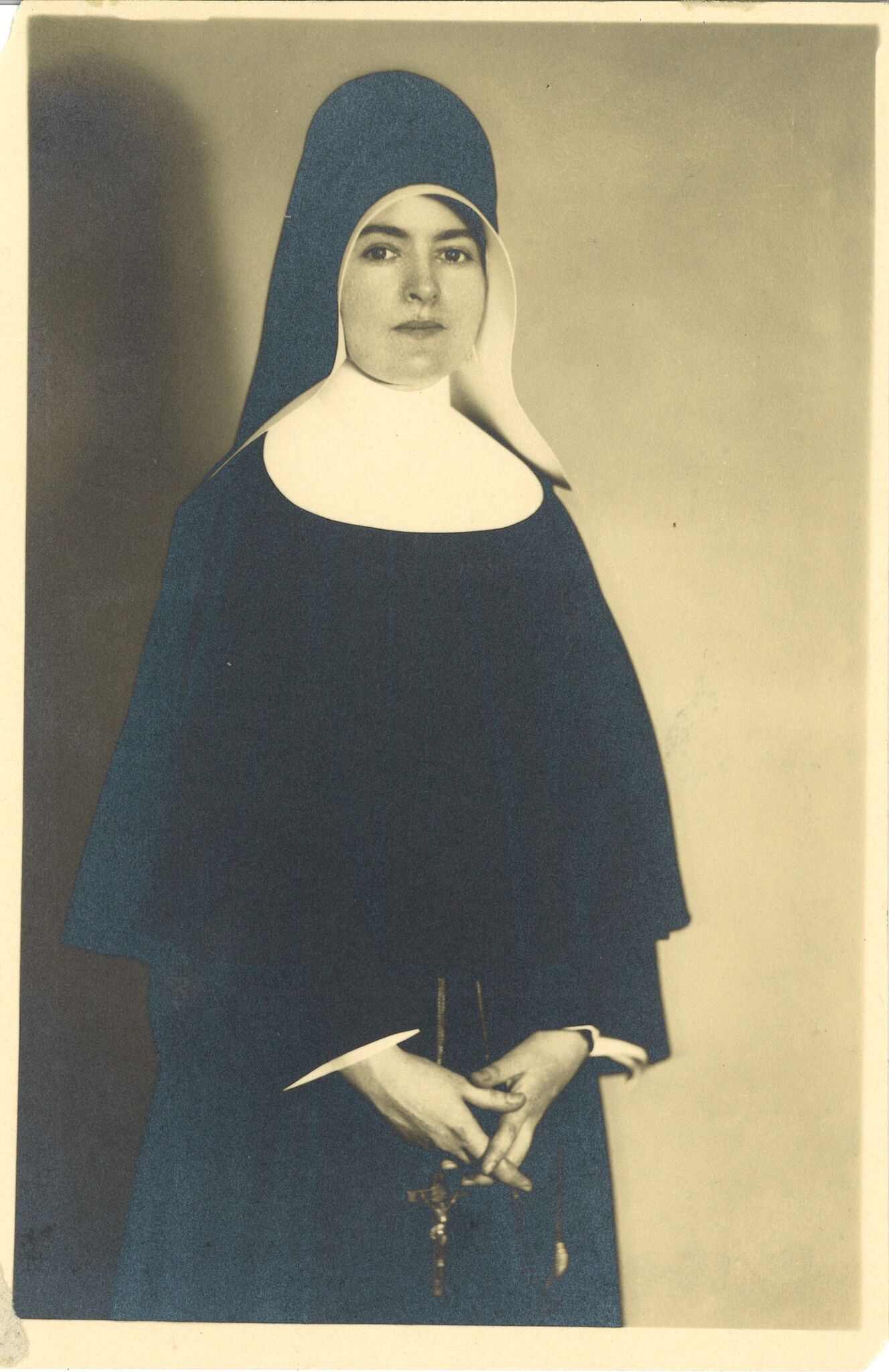 An account from Sister Francis d’AssisiA novice at the Academy at the time, Sister Francis later served as president of Mount Saint Vincent College, from 1954-1965.

The Riva Spatz Women’s Wall of Honour in front of the Margaret Norrie McCain Centre for Teaching, Learning and Research at the Mount pays tribute to the tremendous contributions of women from all walks of life. Among them is Frances Coleman, the wife of dispatcher Vincent Coleman who lost his life while attempting to save hundreds of others when on December 6, 1917 he alerted inbound trains of the fire aboard the SS Mont-Blanc in Halifax.
Read the tribute submitted in Frances’ honour by her grand-daughters E. Diane Smith and Ann L. Finlayson – both Mount grads