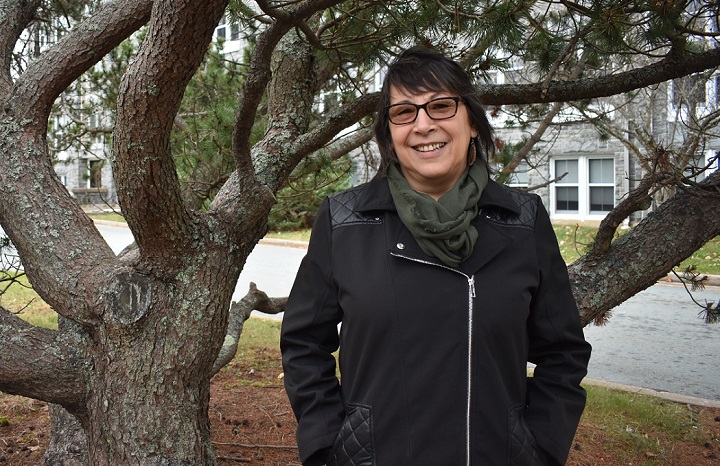 In her words: Learning from stories told by Indigenous women in NS

Born and raised in L’sɨtkuk (known as Bear River First Nation), Nova Scotia, Dr. Sherry Pictou is a strong advocate for Indigenous women in Canada. Sherry began working at the Mount in July 2017 as a professor in the Women’s Studies department, a role to which she brings a wealth of experience and knowledge.

Growing up as a Mi’kmaw woman, Sherry recalls being in her teens and observing the high degree of poverty in her community. She realized there were external (e.g. government) influences affecting her community and she wanted to arm herself with knowledge in the hopes of making positive change.
“I grew up in a time when there was no community-based programming and I wanted to explore how this could be changed. I knew something wasn’t right and I knew enough about general human rights – rights to food and rights to shelter.”
This thirst for knowledge led Sherry to pursue her Bachelor of Arts degree at Saint Mary’s University, with a major in Atlantic Canadian Studies and minor in Political Studies. During her BA program, Sherry recalls having several professors who, for the first time in her life, spoke about Indigenous people in a positive light.
“I was nurtured by some really great professors. Dr. John Reid’s class changed my life. I can remember sitting up in my chair in delight as he taught a course on the history of Atlantic Canada. It was the first time that I heard a teacher portray my people with dignity. In grade school, the history books introduced Indigenous people as savages.”
Through her undergraduate courses, Sherry started making connections between what she was learning in the classroom and some of the challenges in her community related to land and education in particular. “I learned more on the history of why Indigenous people became a federal responsibility and developed an understanding of colonial laws.”
Shortly after completing her undergrad, there was a movement happening among the Mi’kmaw community to assert more control over Indigenous education. Sherry knew she wanted to pursue more schooling so she made the decision to complete her Bachelor of Education at Mount Allison University in 1992. She viewed this decision as a way to better support her community in addressing its education-related issues.

A focus on the stories of Mi’kmaw women

During her BEd studies, Sherry was approached to help coordinate a certificate program for Mi’kmaw addiction counsellors in conjunction with Dalhousie University. Through her involvement with this project, Sherry became interested in adult education in the context of social change. Sherry went on to complete her Master of Arts degree (Education Specialization) at Dalhousie University in 1996 – a pursuit that she describes as a “major turning point” in her life.
“I found a lens through which I could examine my own experience. I learned about the Theory of Oppression and, for the first time in my life, I started to see how the Indian Act discriminated against Indigenous women and how it played such a huge role in the day-to-day lives of Indigenous people, dictating what we could and couldn’t do.”
She credits social activists and educators Paul Freire and Myles Horton, as well as Mohawk scholar Patrica Monture Angus, with being the inspiration behind her Master’s research. Sherry examined the lifelong experience of Mi’kmaw women, capturing stories of Mi’kmaw women of all ages from across the province. They are stories she’s revisiting now for possible publication in a book.
“I learned through my research that these women have a strong sense of resiliency despite having a very dominant patriarchal structure being imposed on them over the years. These women were still connected to their Indigenous consciousness and to the land. They shared stories on things like hunting for food and being torn away from their families to attend residential schools. Their lived experience informed the violence against Indigenous women and also the violence against the land and depletion of natural resources.”
Sherry felt it was important to capture the lived experience of Mi’kmaw women, as this was the knowledge missing from school textbooks. “By discounting experiences or not letting this experience into the classroom, it forecloses a deeper analysis and understanding,” she said.

“These tensions [ongoing oppression of Indigenous women despite their critical role in their communities] are playing out in struggles for social justice in Mi’kmaki, and around the world, where women are taking a central role, including protecting access to food, land and water from corporate and political interests.”

After completing her Master’s degree, Sherry remained a strong voice for her community, becoming involved in the highly-publicized Donald Marshall Junior case which affirmed the 1760 and 1761 Peace and Friendship Treaties and Indigenous people’s right to fish. From the Federal Department of Indigenous and Northern Affairs: “In August 1993, Donald Marshall Jr., a member of the Membertou First Nation, was stopped for fishing in Pomquet Harbour in Antigonish County, NS, and his equipment was seized. Marshall caught 210 kilograms of eels, which he sold for $787.10 and was then charged with fishing without a licence, selling eels without a licence and fishing during a closed season. He claimed he was allowed to catch and sell fish by virtue of a treaty signed with the British Crown. In September 1999, the Supreme Court of Canada confirmed that Donald Marshall Jr. had a treaty right to catch and sell fish. The Court found that Mi’kmaq and Maliseet people on the East Coast continue to have treaty rights to hunt, fish and gather to earn a moderate livelihood. These rights flow from the Peace and Friendship Treaties signed in 1760 and 1761 between the British Crown and the ancestors of the Mi’kmaq and Maliseet.”
“My life at that time was centered on building alliances with local fishermen and building more awareness on the reasons we didn’t sign mainstream commercial agreements. Simultaneously, I was working at the international level to develop an understanding on what was happening to Indigenous people within Canada.”
Through her work on treaty negotiations, Sherry became curious about what people thought about the word “treaty”. That curiosity ultimately led her back to school to pursue her Interdisciplinary PhD at Dalhousie University in 2012.
Her PhD research focused on what her community and allies learned in their struggles for treaty rights (Peace and Friendship Treaties) and explored what the concept of treaty meant to people in those communities. Her research re-affirmed land-based practice as a key treaty concept and offered principles for community development and participation in formal treaty negotiations and consultations. As an example, Sherry applied her learnings to support community initiatives such as restoring ancestral canoe routes and forest and stream restoration.

Now at the Mount, she remains committed to advancing de-colonial teaching by creating an awareness of issues facing Indigenous people, particularly a focus on Indigenous women.
“The oppression of Indigenous women is ongoing because of persisting social and political issues, tensions between discrimination and violence, and silenced voices in formal consultation and negotiation frameworks. This undermines the importance of the role Indigenous women play in land-based practice as a basis for de-colonization. These tensions are playing out in struggles for social justice in Mi’kmaki, and around the world, where women are taking a central role, including protecting access to food, land and water from corporate and political interests.”
Sherry feels strongly about continuing to connect with Indigenous women to understand their learning related to struggles for food and lifeways. She also hopes this research will inform the creation of new courses at the Mount, which will take an Indigenous feminist perspective. For example, she will be introducing a course on Indigenous women’s struggles for social justice this winter through the special topics stream.
Dr. Sherry Pictou has certainly found a home here at the Mount. Her life experience as a Mi’kmaw woman coupled with her extensive educational background and professional experience are valued among students, staff, faculty and the community-at-large.
Next article »
Business student Connor Hirtle back to school and work following devastating accident
« Previous article
Helping heal a wounded city