Home » About MSVU » Media Centre | News » #Euromaidan—History in the Making 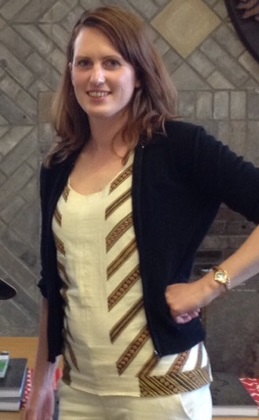 Today Dr. Krawchenko lives in Halifax, but she grew up between Canada and Ukraine. In fact, her family’s apartment was only blocks away from Kiev’s Maidan Nezalezhnosti (or Independence Square), the epicentre of the 2013-14 protests. Several of Krawchenko’s family members live in Kiev today; her sister runs Osnovy Publishing, a press founded in 1992 by their father Bohdan Krawchenko and his partner Solomea Pavlychko. “And so, as you can tell,” she says, “I have close ties to Ukraine. My sister was an active participant [in the Euromaidan protests], and I watched the events from afar in horror and awe—in horror at what the government forces were doing and in awe at the richness of Ukraine’s civil society.” Earlier this month, Krawchenko, with the support of Dalhousie University’s European Union Centre of Excellence, hosted a book launch, art show, and panel discussion on the 2013-14 protests in Ukraine. The event included the launch of #Euromaidan—History in the Making, Osovny Publishing’s stunning large-format book of photography of the Euromaidan protests, as well as a photo exhibit of selected images from the book, and a panel discussion on the protests. Panelists included Christopher Majka, a biologist, environmentalist, policy analyst, and writer with roots in Polish, Russian, Ukrainian, and Czech soil; Dr. Lyubov Zhyznomirska, originally from Kiev and an assistant professor in the Department of Political Science at Saint Mary’s University; and Dr. Gerald Romsa, a retired academic with roots in southern and central Ukraine. The event drew members of Mount Saint Vincent University, Dalhousie, and Saint Mary’s University’s academic communities, as well as members of the public and Halifax’s Ukrainian-Canadian community. All proceeds from the sales of the book were donated to the Ukrainian Aid Centre Charitable Foundation (Centr Dopomogy), which presently focusses on providing aid and rehabilitation to the wounded. All available copies of the book sold out, including Tamara Krawchenko’s personal copy. We asked Dr. Krawchenko about her professional and academic involvement in the event and in the creation of the book. She is a public policy expert, though her current research in the Mount’s department of Family Studies and Gerontology does not focus on Ukraine. “Growing up in Ukraine cemented in me the importance of good government and good public policy,” she told us. “This makes the difference between states that are thrown into poverty by rampant corruption and those that thrive and are more equal. It makes a fundamental difference in day to day lives.” She hopes that this event will help Canadians to understand the events in Ukraine, and what those events mean to us here. “This event is important to me because it is about the future of Ukraine. Ukrainians are fed up. They just want to live in a country where there is respect for human rights and rule of law. We, as Canadians should never take this for granted and we have a duty to support other countries who are desperately trying to achieve this.”