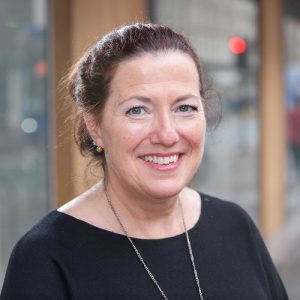 Dr. Susan Trenholm is bringing both a wealth of experience and a strong desire to learn to her new role as Dean of Professional Studies and Graduate Studies at Mount Saint Vincent University.

“Right now, I’m focused on getting out and talking to people and listening and trying to understand what’s important to my colleagues,” she says. “I see my role very much as a problem solver and facilitator for getting things done and it’s really good to talk to people and find out how this role can support them to do their best work.”

Before joining the university’s administrative leadership team on August 1, Susan last spent time at MSVU while earning her Bachelor of Public Relations (’88). She says the choice to accept her new position at the university was an easy one, primarily driven by her connection with the institution’s foundational principles plus her experience as a student.

“As an alumnus of MSVU, I have a bit of a history with the place and loved it. But I think, more fundamentally, I’m a really fervent believer that education is the way forward, period. It’s the answer to inequality, it’s the way we promote prosperity, and MSVU is really committed to making education widely accessible and always has been,” Susan says. “It’s in the organization’s DNA. There is no question about MSVU’s commitment to reaching traditionally underrepresented groups. I think it’s really the way our society is going to move ahead.”

Susan came to academia later in her career, after spending 20 years working in positions in government and the private sector. Her experience includes advising the Ontario, Nova Scotia and federal governments and leading philanthropic and partnership investments for Pfizer Canada. She joins MSVU from King’s College London (UK) where she served as Director of the Public Policy and Management program, as Chair of the Postgraduate Education Committee, and as an elected member of the Academic Board (Senate) and College Council (Board of Governors).

“King’s College in London hired me after I finished my PhD there, which was wonderful. I was so fortunate to be able to live in one of the world’s great cities and do some fantastic work with really impressive and amazing people,” she says.

And, though Susan notes that there are significant differences between academia in the UK and Canada, she says one thing is surprisingly alike across the two systems – the students.

“I’ve had hundreds of students pass through my classrooms and my office doors and, though each student is unique in their own right, much of what they’re looking for is amazingly similar no matter where you go,” Susan says. “They want to be challenged and they want to learn, and they want something back for all that they’re putting in. I think universities are really doing their best to meet changing student needs and expectations and we all have to stay current and consider what we’re doing in the context of what students need and want.”

Susan has hands-on experience instructing students at both the King’s College London Business School and the University of Melbourne’s Department of Management and Marketing. Along with her PhD in Management from King’s College London and her Bachelor of Public Relations from MSVU, she holds a Bachelor of Science in Biology from Dalhousie University and a Master of Business Administration from York University. She is also involved in research as a co-investigator with the Social Sciences and Humanities Research Council (SSHRC)-funded Women Entrepreneurship Knowledge Hub based at Ryerson University.

Next article »
Welcome, and welcome back, to MSVU – A message from the President
« Previous article
Dr. Jacqueline Gahagan joins MSVU as new Associate Vice-President, Research