“There’s an aspect of social justice that I want to bring to MSVU and to my students and future research – something I call eco-social justice. How can we achieve justice for humans and non-humans?”
– Dr. Columba Gonzalez-Duarte, Assistant Professor, Sociology and Anthropology 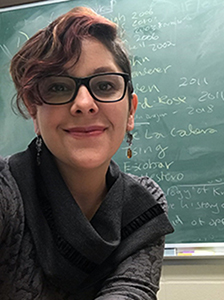 Pursuing a greater understanding of the relationship between monarch butterflies and the people and communities they interact with has carried Dr. Columba Gonzalez-Duarte far, connecting her roots in Mexico to her new home in Halifax where she is now an Assistant Professor with Mount Saint Vincent University’s Department of Sociology and Anthropology.

Through her research, Columba explores the monarch butterfly’s tri-national conservation dynamics, exploring connections between NAFTA’s agri-food industry, labour migration, and monarch decline. She has also worked with Indigenous communities that co-habit with the butterfly across Canada, the United States and Mexico, documenting their knowledge and ways of relating with the migratory insect. She says that this work is an example of how, beginning with her PhD, she started doing what she refers to as multi-sited and multi-species field work. 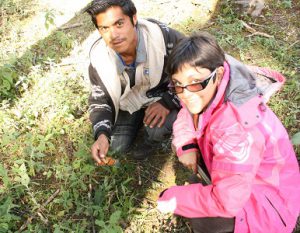 “It’s a bit of pushing the boundaries of anthropology. I work with human and not-human communities – in this case the butterfly – and I also work with different communities across North America, so that gives my work as an anthropologist a unique lens,” she says.

Regarding how she came to choose monarch butterflies as her research subjects, Columba said she was looking for a project that met clear, cross-national criteria.

“I’m originally from Mexico and have done field work in Mexico. I also did field work for my master’s degree in the United States, so I was used to this idea of working binationally and across borders. Living in Canada, I had this idea of wanting to include Canada – or this territory we call Canada,” she says. “I had an original idea of following whales on the west coast, but I was living in Toronto. I searched for living things that connected these territories. We obviously have human migrants, but we also have these insects which migrate across all of these territories. I thought it was perfect for connective geographies that matter to me at a personal level.”

Since joining MSVU in spring 2020, Columba has been initiating her teaching practice while continuing work on her research project, Convergent Migrations, as well as finishing a book based on her doctoral research. She says the pandemic has not affected her ability to carry out her research or engage in teaching, but it has meant differences for both. Her instruction has been entirely online so far and – even though it focuses on collecting community-based data – so has her research. 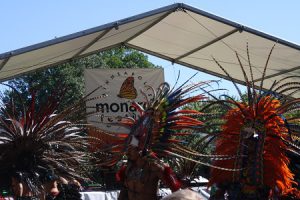 “My PhD research involves mainly communities where I would go see that human-butterfly relationship. There’s a large online community built around the idea of protecting this butterfly, so I follow those communities. I am in constant connection with what they are doing and what worries them, so I don’t feel like I have this large detachment from my field work sites,” she says. “I also have remote connections with sites in Mexico, so we often exchange social media messages and that keeps me connected with them.”

Columba visited communities where she could observe the human-butterfly relationship while completing her PhD in socio-cultural anthropology from the University of Toronto, with a joint degree from the School of Environment. It’s that in-person experience of spending time and collecting data in communities that first drew Columba to anthropology, and it remains her passion – one she has put her own stamp on.

“I think the most special thing about anthropology is that we get to do field work. We get to go to communities and learn from the communities themselves – that’s where we collect our data. To me, being in the communities was what really called my attention when I started my undergrad,” she says.

Columba says her nature-based approach to her research reflects her personal history and the guidance she’s received over the course of her studies. 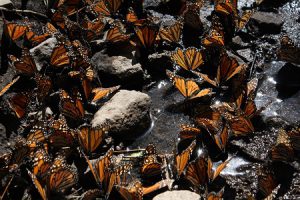 “My interest in nature comes from my childhood for sure. I grew up on a farm but also between a city and a farm – we would do half of the month in the city and half of the month on the farm. That gave me such an interesting mix of both,” she says. “I also have mentors – different professors in my life who are doing similar topics – working with water, land, other animals, birds. Having conversations with them inspired me to also work with environmental topics. I just feel comfortable when I am outdoors and in a natural environment. That’s the sort of field work that I like.”

Columba completed both her undergraduate and graduate degrees in her home country of Mexico before moving to Toronto for her PhD. After graduating in 2019, she gained a postdoctoral fellowship at the Department of Geography and Planning at the University of Toronto and the Max Planck Institute for the Study of Religious and Ethnic Diversity.

“I felt very lucky to get this position and I found it very interesting that I was able to teach in a department that has sociology and anthropology together,” she said. “I appreciate the lens of social justice that MSVU has. Particularly, our department is a progressive department with a strong focus on social justice and that called my attention when they offered me the position.” 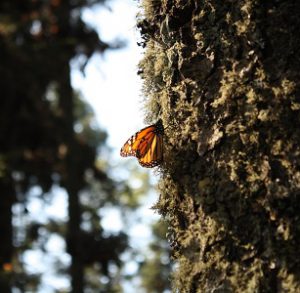 Moving forward, Columba intends to share her interest in social justice with her students, and – as seems to be her custom in how she approaches all of her work – she’ll do so with her own special twist.

“There’s an aspect of social justice that I want to bring to MSVU and to my students and future research – something I call eco-social justice,” she says. “How can we achieve justice for humans and non-humans? The butterfly project allows me to explore that in a context of ‘thinking beyond borders’ – national borders, and those borders that we construe between human and non-humans. That’s my goal and that’s what I mean to pass to my students in my lectures and in my research.”

Next article »
Statement on anti-Asian racism and misogyny: From the Interim President and Vice-Chancellor
« Previous article
MSVU student named recipient of Frank H. Sobey Award for Excellence in Business Studies