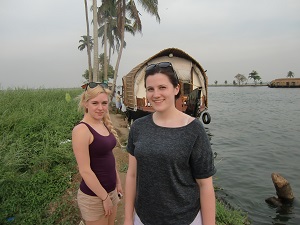 When Psychology students Krystina Trites and Mallory Guthro began their Honours research this time last year, they had no idea that they would be presenting their thesis findings in Trivandrum, the capital city of the southern Indian State of Kerala.

A stone’s throw from the Arabian Sea, Mallory and Krystina presented to delegates from around the world at the March 2014 International Police Executive Symposium in an experience that surpassed all expectations.

Mallory’s presentation focused on police attitudes towards the reality of rape culture and who should be responsible for tackling cyberbullying while Krystina discussed the relative degree of acceptance that public police officers hold towards the growth of private policing in today’s society. Their supervisor, Dr. Stephen Perott of the Mount’s Psychology Department, reports that they did such a great job while interacting with some of the world’s top policing scholars and practitioners that he had to repeatedly remind delegates that they were Honours, not graduate, students. 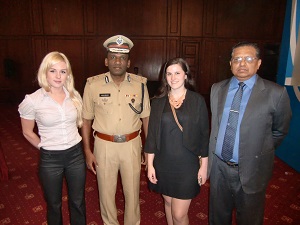 The trip wasn’t all work, however, and the student researchers experienced a life-changing four-day tour taking them from their port of arrival in Bengaluru, India’s centre for high tech, to the conference venue in Trivandrum, near the southern tip of the subcontinent. Overnight stays were in Mysore, with its fabled palace; Calicut, the City of Spices; and a magical 19 hours on a houseboat on the backwaters and lagoons near Alleppey.

Perrott reports that both students “did the Mount proud” and in the tradition with the Psychology Department’s ability to attract and nurture truly exceptional Honours students.
(Left to right: Mallory Guthro, Inspector General Manoj Abraham