The Mount Mystics celebrated their 2019-20 varsity season on Wednesday, April 8 with their first-ever virtual awards presentation, dubbed Best of the Blue – Athletics Awards.
This year’s season witnessed an unusual wrap-up due to the COVID-19 pandemic. Typically, an athletics awards banquet is held each spring to celebrate the year’s successes. Though that was not to be this year, MSVU Athletics’ One Way, Together philosophy remains strong and they were determined to continue in this tradition.
The 2020 Best of the Blue virtual awards celebration saw Mystics alum, fans, friends and family all tune in to a Facebook watch party to celebrate the year’s successes of our exceptional student-athletes. (Missed it? Visit msvu.ca/athletics to watch.)

The evening featured many special guests. Thank you to MSVU President, Dr. Mary Bluechardt, the MSVU Alumni board and each Varsity Coach who answered our invitation to be involved. A special thank you to photographer Dave Gallant who has poured countless hours into the Mystics teams and Dr. Robert Berard, a fan-favourite webcast commentator at our basketball and volleyball games.
Congratulations to all MSVU student-athletes on another incredible year filled with hard work and dedication to both athletics and academics. And sincerest thanks to our senior players who completed their Mystics careers after many committed seasons.
Though we may not have been able to gather in the Rosaria Student Centre this year, in true Mystics fashion, this year’s virtual event was a wonderful celebration of our community’s success and shared achievements.
Congratulations to your 2019-20 MSVU Best of the Blue Award Winners:
Female Player of the Year
Mariah Wright, Women’s Soccer 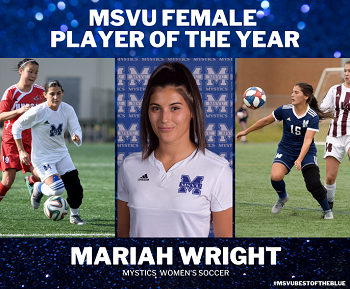 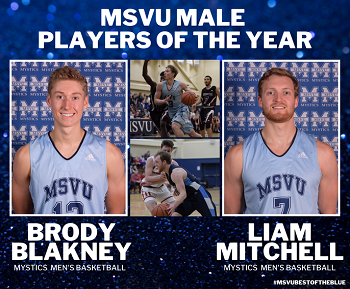 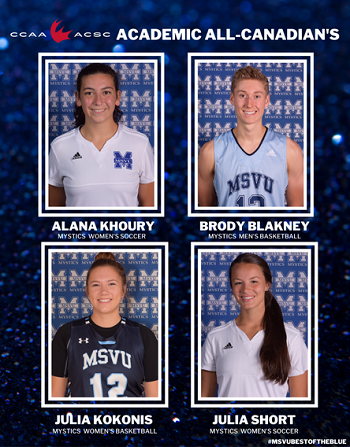