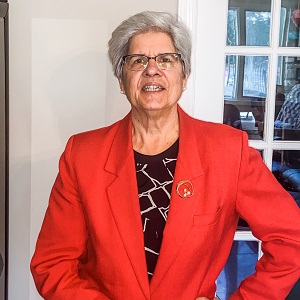 Sister Margaret Mary Fitzpatrick was elected the Congregational Leader of the Sisters of Charity Halifax
in October of 2020. She has the honor of serving her Sisters and advancing the charism of charity
throughout the world. Fitzpatrick retired as President of St. Thomas Aquinas College in June of 2020
remaining a tenured faculty member. She will continue to teach at the College for several years.
Dr. Margaret Mary Fitzpatrick, S.C., president and CEO of St. Thomas Aquinas College in New York for 25
years, became a nationally recognized leader in higher education by finding strategic ways to adapt to
rapidly changing times. A member of the Sisters of Charity, she has devoted her life to serving the world
through education.

Born in Brooklyn, New York, and raised in Massachusetts, Fitzpatrick had two callings: religious life and
higher education. After completing her bachelor of science in mathematics, she earned a master of arts,
followed by a master of education and a doctorate in higher education from Columbia University. Her
dissertation, “Orientation for Social Responsibility,” explored the idea of higher education as a means to
serve society.

From 1974 to 1981, she served as campus minister of Queensborough Community College in New York,
then took a position as assistant dean at St. John’s University in New York. She spent 14 years at the
18,000-student multi-campus institution, overseeing the university’s opportunity programs to help
students succeed and thrive in college. The university quickly assigned her larger roles ranging from
student life and academic administration to central administration. Colleagues admired her singular
ability to motivate employees, engage students, create an intellectual dialogue and promote Vincentian
values.

In 1992, Fitzpatrick was promoted to senior vice president at St. John’s. In that role, she supervised
seven vice presidents, oversaw a $50 million capital campaign, formulated a university strategic plan and
oversaw day-to-day operations for the Queens campus, among other duties.

In 1995, she became the eighth president of St. Thomas Aquinas, a liberal arts and sciences college with
3,000 students in Sparkill, New York. Fitzpatrick remains involved in teaching as a tenured professor in
the fields of education, mathematics, science and religion.

As chief executive officer and academic leader of St. Thomas Aquinas, she placed sustainability at the
forefront of the college’s efforts. She created the Global Center for Ethics & Social Responsibility as a
hub of these efforts and led the way for the college to join the Catholic Climate Covenant, a pledge to
educate students, employees and community members on climate change. As part of the overall efforts,
St. Thomas Aquinas incorporated sustainability into the curriculum and daily operations of the
institution. Fitzpatrick lends her wisdom and leadership to service on a number of boards, including
DePaul University and St. John’s University.