Home » About MSVU » Media Centre | News » A love of teaching worth shedding a tear for: Meet Dr. Kathy Darvesh

A love of teaching worth shedding a tear for: Meet Dr. Kathy Darvesh 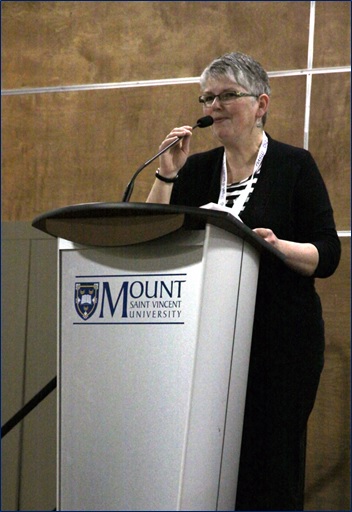 “I almost burst into tears,” Dr. Kathy Darvesh said with a smile while reflecting on the emotions she felt at the end of a particularly productive day of research with her honours students. “It’s not that I hated my home that I was going back to, but I was having so much fun that I didn’t want to stop what I was doing!”
An award-winning Chemistry and Physics professor at Mount Saint Vincent University, Kathy is a stand-out researcher, teacher, and role-model to many.

An interest that runs in the family

She was first exposed to chemistry at a young age. Her father was an organic chemistry professor and her mother held an engineering degree. She remembers going to the university where her father worked so he could check on his experiments. While she was there, she was given molecule model kits to play with. She also remembers when her father’s post-doc and graduate students helped to build her family’s cottage, all the while talking chemistry. “It was all around me,” she said.
Based on an interest likely sparked by this early exposure, Kathy pursued a PhD in theoretical chemistry. This field involves using the Schrödinger Equation (most simply, a mathematical equation used to describe the behaviour of electrons relative to their nucleus) to solve problems and make predictions based on chemical properties, like energy, shape and size.

“To be part of a student’s transformation at University is really exciting for me. I’m grateful for it every day and I don’t know if I will ever want to stop.”

Research focused on helping others
Midway through her career, she became involved in a collaborative research project which investigated compounds that could be potential drug treatments for Alzheimer’s Disease (AD). It was thought that the enzyme butyrylcholinesterase was ultimately responsible for causing AD. So, several small molecules were tested to see if they could inhibit the enzyme from being activated. If the enzyme could be inhibited, then there could be a potential drug for AD.
Kathy’s contribution to this research was to perform calculations to determine the feasibility of a molecule being a potential inhibitor of the enzyme. The idea was, that her calculations would reveal the geometry of a potential inhibitor molecule. Using that information, they could determine whether or not it could fit in a hole called the ‘active site’ on the enzyme. Similar to how a key fits in a lock, if the molecule could fit in the active site, then there was a possibility that the molecule could function as a drug against AD.
During Kathy’s time on this project, they discovered chemicals that functioned as much better inhibitors for AD than some of the current drugs, though a cure has yet to be found.
And while she hopes her research will have an impact on the lives of others, it’s that same potential that drives her to teach. “I know I can make a difference with my teaching every day,” she said. “That’s the one area where I’m very confident I can do some good and can see results very quickly.”

A passion for teaching lessons on many levels

Kathy has become so passionate about making the classroom memorable for students, that her recent scholarly work has involved investigating better ways to teach chemistry. For example, she has published in the Journal of Chemical Education about how an Etch A Sketch® can be used to describe the relationship between solids, liquids, and gases at a given temperature and pressure – an important principle in chemical thermodynamics.
“To teach is to live forever,” said Kathy. “When you interact with your class and you set an example of kindness and helpfulness, then that example can propagate.” This teaching philosophy is one that she cultivated early in life, when she asked a question in high school and was told by her teacher: “That was the stupidest question I’ve ever heard.” This helped her recognize what kind of teacher she wanted to be. She wants her students to learn and retain course material, but just as importantly, she wants them to remember the example she set and retain those lessons long after their time in class together.
These teaching attributes earned Kathy the title of “Canada’s Top Chemistry Educator at the Post-Secondary Level” in 2016. When this was brought up, she smiled, paused, and looked at her award which was the soul feature on an otherwise, empty office wall.
To Dr. Katherine Darvesh, being a teacher is her favourite part of her job. In fact, she loves teaching at MSVU in particular, because she can teach a student more than once and see how that student matures and transforms during their degree. “To be part of that journey is really exciting for me. I’m grateful for it every day and I don’t know if I will ever want to stop.” When that day comes, no doubt there will be many at MSVU bursting into tears.
Next article »
MSVU named pilot institution for new program supporting equity, diversity & inclusion in research
« Previous article
New Dean of Arts & Science at MSVU: Meet Dr. Carrie Dawson