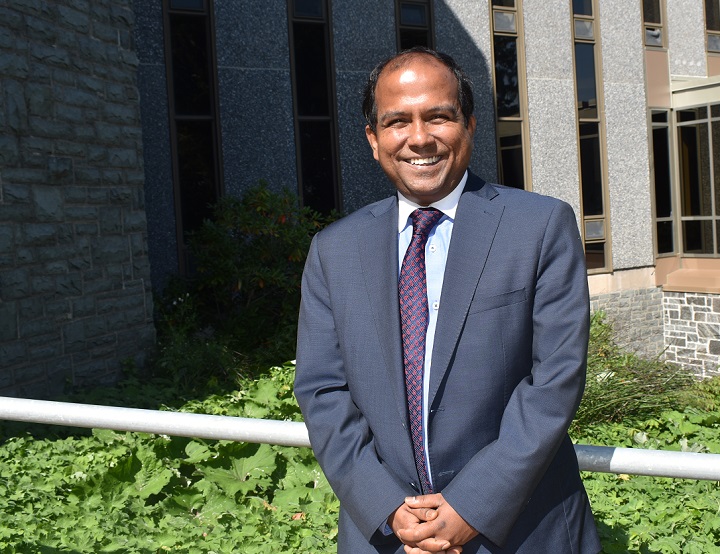 Born in the east-central part of Bangladesh, Dr. Mohammad Siddiquee is no stranger to business. “My grandfather was a successful businessman. But we didn’t talk much about business growing up.”

It wasn’t until Mohammad was 18 years old that his own passion for business and investment was ignited. “My father gave me some bank stocks and I became fascinated by how the stock market worked. I think this experience later motivated me to go to a business school.” In 2017, Mohammad joined the Mount as an Assistant Professor in the Department of Business and Tourism.

The decision to pursue further education in business was not necessarily a clear path for Mohammad. He recalls growing up in a culture where if you did well in school, the expectation was that you went on to be an engineer or a doctor. Although he respected both of those professions, Mohammad did not see himself going down either of those paths. Instead, he followed his interests and pursued Bachelor’s and Master’s degrees in Business Administration at Jahangirnagar University in Bangladesh.

An appetite for knowledge

His never-ending desire to know more coupled with his curiosity about other parts of the world prompted Mohammad to pursue further education in Canada.

“Many of the world’s renowned business schools are in North America. Also, a lot of major companies are based out of North America. I thought if I wanted to pursue a career in business and be in academia then I would apply to a Canadian university,” he said.

After some extensive online research, Mohammad decided to pursue a Master’s in Business Administration at the University of New Brunswick. He recalls his move to Canada being exciting but also challenging. Perhaps one of the biggest adjustments for him was adapting to the Canadian climate. “Back home, winter for us is 12 degrees. It was my first time seeing snow and being in the cold, so it was tough. I spent a lot of time reading and studying.”

During Mohammad’s first investment course at UNB he met one of his greatest mentors, Dr. Eben Otuteye. “My professor, Dr. Otuteye, taught the course differently. The contents he covered and real life examples he provided were different from any other professors.” It was Dr. Otuteye who motivated Mohammad to pursue his doctoral studies; he has also inspired the way Mohammad teaches today. As well, Mohammad cites the book The Intelligent Investor, written by Benjamin Graham, who was a professor of Warren Buffett’s at Columbia University as a motivator for his PhD research. Mohammad considers Dr. Otuteye as his Ben Graham.

“I think we should teach our students what works. How else can they learn investment without studying the money masters like Warren Buffett, Charlie Munger or Benjamin Graham?”

Learning from the best and brightest

Mohammad began his PhD in Finance and Psychology in the winter of 2012. His research focused on exploring how investors make common stock investment decisions and, since cognitive limitations often lead to suboptimal decisions, looking at what can be done to improve their decision-making processes. Mohammad hopes his research will ultimately help people make intelligent investment decisions. From this research, he has also developed a value investing decision-making tool which is capable of picking stocks that have the characteristics to be part of a value portfolio and can outperform the market over a long period of time. He uses this tool in his finance and investment classes.

Another one of Mohammad’s many projects involved transcribing and publishing the meeting notes of a Berkshire Hathaway annual shareholders meeting in Omaha to capture the wisdom of notable businessmen Warren Buffett and Charlie Munger. Mohammad has collaborated with Dr. Eben Otuteye to publish these notes in a book titled, A Master Class with Warren Buffett and Charlie Munger, which retailer Amazon describes this way: “Warren Buffett and Charlie Munger are not only master investors. They are also master teachers who know how to make their points so clearly that everyone can understand. Readers will not be disappointed with the timeless principles as well as the intelligent and imaginative solution to business and life problems they will find from the answers Warren and Charlie gave to the questions posed at the 2014 Berkshire Shareholders Meeting.”

Mohammad feels strongly that students should get a mix of theory and practical application in the classroom, which is why he has enjoyed compiling these notes from some of the best and brightest. “I think we should teach our students what works. How else can they learn investment without studying the money masters like Warren Buffett, Charlie Munger or Benjamin Graham?”

And although Mohammad is driven and excited by the work of those who came before him, he is equally inspired by the next generation of business leaders.

“I love helping people to learn and to succeed. I believe teaching is probably the only profession where I have the freedom of expressing myself through my research and teaching. My job is to ignite the learning spree in students so that they can think and learn on their own. I want my students to focus on things that are under their control.”

“Nothing is more important in life than to have financial independence.”

Mohammad also believes in a multidisciplinary approach. “I want my students to be equipped with lots of tools to deal with potential challenges. If you have only a hammer in your toolbox, all the problems in the world will look like a nail to you. Just as with life, the situations and problems that businesses face today are multidisciplinary and require a variety of solutions.”

When asked why people should study finance, Mohammad’s answer is simple. “If you want to accumulate wealth, you need to study finance. One thing we all need to deal with in some aspect of life is money and we need to have some basic ideas of finance and investment. Nothing is more important in life than to have financial independence.”

Of special note, Mohammad is in the process of developing a course on women and investing, a class Warren Buffett used to teach at the University of Omaha (now University of Nebraska Omaha) in the 1950s and early 1960s. Dr. Siddiquee wants to encourage more women to pursue careers in the finance industry. He hopes to launch this course in the summer of 2018.