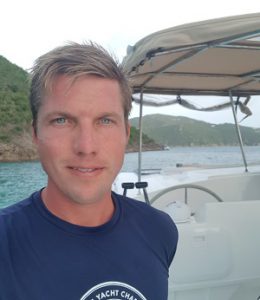 Flair Martin starts many of his days this way: by looking out at the ocean. His view isn’t from a cottage close to a lake or an apartment overlooking Halifax Harbour. It’s from on board a catamaran yacht where he lives in the British Virgin Islands.

As co-owner of Unplugged Yacht Charters, Flair serves as a yacht charter broker. “It’s like a travel agent for yachts,” Flair explains. His company helps vacationers get their sea legs and fully enjoy many Caribbean destinations aboard an elegant and spacious yachts. “It’s like glamping,” says Flair. “It’s luxurious, but you’re in the elements.”

Sailing several of the seven seas wasn’t the career path Flair expected to follow. After graduating from the Mount in 2014 with a BA in history, he went to work in Alberta and then B.C. His partner, Lisa Roland, invited him to visit her in the Turks and Caicos. “I fell in love with the area,” says Flair. He also learned to sail, a skill that forged his career as a skipper for charter companies and subsequently co-founder of his own company. 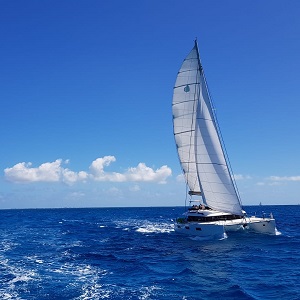 Although history and sailing southern seas may seem worlds apart, the connections between Flair’s two passions are strong – and numerous, he says. Honing his communication skills as a student has given him an important foundation for building a business that relies on managing expectations, drawing in new clients, and ensuring everyone remembers their Antigua vacation with a smile.

His knowledge of history is also an asset. “I tell stories, do research, and even relate some legends, too,” says Flair.

“I love these stories,” adds the Cape Breton native. “And I have a better understanding of them now.”

For Flair, there is also a personal connection between the history he learned at MSVU and the country he now calls home. “Where I am today, what I am doing today puts the stories of early modern European sailors and the peoples they encountered into context.”

(This story was originally published in the latest edition of Folia Montana – MSVU’s alumni magazine.)