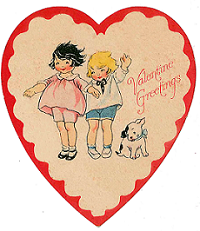 With much cold and snowy weather surrounding us this winter, Saturday is a welcomed retreat for many who anxiously await the anticipated warmth they associate with February 14th. However, Valentine’s Day is a tradition that evokes mixed emotions in many of us, and while some greet the tradition with joy and excitement, others are not necessarily feeling the love.

We caught up with former recipient of the Mount’s Teaching Innovation Award, Dr. Anna Smol (professor of English), and The Coast’s: Best of Halifax silver award recipient in the Best Professor category, Dr. Randi Warne (department of Cultural Studies), to hear their insights on the historic and contemporary celebrations of Valentine’s Day.

“There are a couple of Valentines who were martyred and sainted in the early Christian church, but how they became associated with the idea of romantic love in the Middle Ages is not clear,” says Smol. “Geoffrey Chaucer may have been the first poet to make the connection, through his poem ‘The Parliament of Fowls’.” 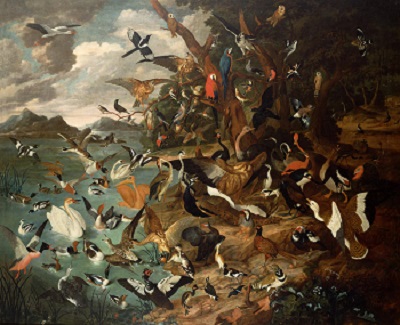 The poem, written around the 1380s, connects the idea of love and courtship with birds mating on Saint Valentine’s feast day, and represents a range of ideas about love that hold some similarities to modern expressions of devotion and admiration. (Left: Parliament of Fowls painting by Carl Wilhelm de Hamilton)
“Chaucer describes having a dream in which he is actually shoved into a garden of love… where the noble goddess Nature is gathering together all the birds because this is Saint Valentine’s Day, when the birds get to choose their mates,” Smol explains.
After all the birds have paired off, they sing a song in praise of Saint Valentine— welcoming the sun of summer as they shake of the storms of winter.
“It’s pretty hard, especially this year in Nova Scotia, to imagine February 14th as a day in which we’d be celebrating the end of winter storms and the coming of summer!” Smol notes. “But in Medieval England, apparently, the months of February and March were considered the season for birds to mate and for humans to start preparing the fields for the summer. Maybe if we sing the birds’ song in Chaucer’s poem we can melt some of this snow!”

Valentine’s Day has become a feature within our yearly calendar— easily marked by the red and pink hearts and roses that line the shelves of our stores, and add splashes of colour against the whites and greys of our winter months: 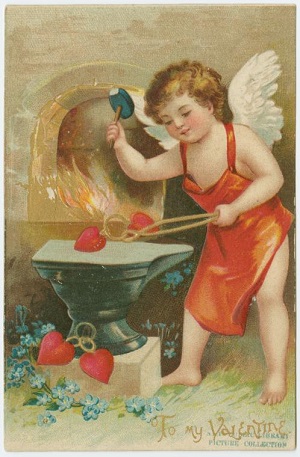 “It is both colour- and candy-coated and coded,” Warne laughs, at the play on words. “Look at what candy is in the store, and you know what season we are supposed to be celebrating.”
According to Warne, a commercial society is based upon the consumer’s anxiety. Valentine’s Day has become a viable niche for commercialism, and as advertising and marketing efforts grow, the more anxious and obligated we feel participating in them:
“By the time you get to the mid-twentieth century, you get mass-produced valentines… I remember these from my childhood, and it was horrible, frankly. At one point, we were allowed to give valentines only to the people that we wanted to give valentines to, but that doesn’t work, because some people get all the valentines, while other people get none.”
“We had to find other ways of distributing the wealth, or rather the love,” Warne adds. “But the problem with that is that people who thought they were getting valentines just because someone had to give them one still felt the same forms of exclusion. Rituals that involve setting some people apart from others note differences and distinctions between people and there are always people on the losing end of that.”
So why do we do these things? Dr. Warne argues that, in part, it is just marketing, but also, there is a kind of sentimentality around having a sweetheart or special someone.
“There is an attempt to preserve a moment or memory that is tender. However commercialized our environment, I think that at the best of times, people cherish these moments of closeness… whether they happen on Valentine’s Day or not.”

However you celebrate Valentine’s Day— or not— let’s all take warmth from the notion of admiration and celebration. And, just maybe, it’s a good thing we have at least one reminder on the calendar to share the love!