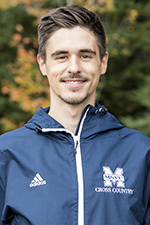 “Matthias has been participating in endurance and outdoor sports his whole life. Matthias competed for both the Varsity Track and Field, and Varsity Cross-Country teams at Dalhousie for three years. Being a team captain for both of these teams helped foster his leadership skills, and aided the development of his coaching skills. He has competed multiple times at the national U-Sports (then CIS) Cross-Country Championships, and finished as high as 6th in the AUS Indoor Championships 3000m, and 7th in the AUS Indoor Championships 1500m. In recent years he has helped coach with the HaliFast Athletics Club and most recently aided the Dalhousie Cross-Country and Track and Field teams as an assistant coach. Matthias is still an avid runner himself and can be regularly found competing in local Maritime road races.”